A home for tourists
Content submitted by UNWTO – Grace 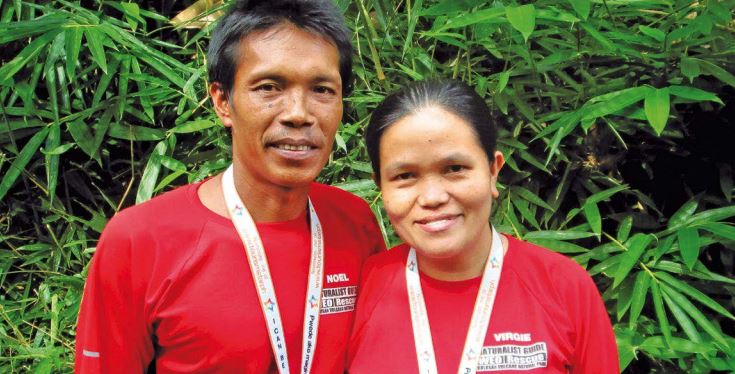 My name is Virginia ‘Virgie’ Deocareza Negrite, and this is my story…

I am thirty-two years old, and a mother of two. I have always had my feet rooted in nature’s ground. I grew up in Brgy. San Roque, Bulusan, Sorsogon situated at the foot of the Bulusan Volcano Natural Park (BVNP). During my growing up years, my family used to occupy a piece of land within the park for slash-and burn-farming to augment their income and provide for daily sustenance. Poverty made life difficult. My dreams to fulfill my aspiration of becoming a public high school teacher became so out of reach.

To attain my dreams, I migrated to Metro Manila where I applied, and was hired, as a factory worker for a year. Then I worked as a House Help or ‘Kasambahay’ in return for my schooling. I was enrolled and finished the 1st year of college for the course of Bachelor in Secondary Education (BSE) in the Pamantasan ng Lungsod ng Pasay (PLP), until I faced the crossroads of my life to choose between financial support for my family or fulfill my dreams of becoming a teacher. I sacrificed the latter.

After years of struggle, my whole family bonded together and decided to contribute for the continuation of my education. That was the year 2000. Every ounce of contribution for my education was sourced out from hard labor, from selling tilapia fished from Bulusan Lake and farmed products harvested from their clan’s kaingin in BVNP and portions of salaries of my siblings serving also as household workers in Manila.

As years passed and while I was grappling with poverty, AGAP Bulusan, Inc., a community-based multi-sectoral environmental NGO, started to operate ecotourism services of Bulusan Lake. The BVNP in Bulusan Area is endorsed by the LGU of Bulusan, the Province of Sorsogon and BVNP Protected Area Management Board (PAMB). Partnerships were done with AGAP Bulusan’s Mission to protect and conserve the biodiversity, as well as to develop ecotourism products and services.
As a lake fisher, I was one of the beneficiaries trained as an Eco Guide in 2010 and during these initial stages started earning money from tourism-related services.

In a spate of luck, in October of 2011, the Bulusan Area Biodiversity Conservation and Ecotourism Support Project was granted funds by the Global Environmental Facility (GEF) under the Small Grants Program (SGP) of the United Nations Development Program (UNDP). The project was done in partnership with six barangays bordering BVNP and Bulusan LGU and the Provincial Government of Sorsogon, together with National Government Agencies (NGAs) such as the Department of Environment and Natural Resources (DENR), Department of Tourism (DOT), Department of Trade and Industry (DTI), Department of Labor and Employment (DOLE), Department of Science and Technology (DOST) and Department of Agriculture (DA), and the academe such as the University of the Philippines - Los Baños (UPLB).

The project involved fifty-hectare reforestation of the denuded area of BVNP due to slash-and-burn farming and illegal cutting of trees; establishment of six community-based nurseries in six bounding barangays of BVNP; organization and mobilization of People’s Organizations (PO) in the said barangays and environmental education and as a form of advocacy known to the communities as ‘Dalaw Turo’. In addition, training to the beneficiaries was conducted for them to serve as Naturalist/Mountain Guiding and Wildlife Enforcement Officer (WEO).
Likewise, technologies where introduced in Sustainable Agriculture on Organic Vegetable Farming, Beekeeping, Handicraft, Pili Pulp Oil Production and Aqua-culture. In return, beneficiaries serve as Volunteer Environmental Stewards as deputized WEO by DENR and Emergency Responders to Tourists in times of need and to their communities during calamities such as typhoons and volcanic ash explosions. Moreover, agricultural products will be developed using new technologies to form part of the fusion of Agriculture and Tourism, also known as Agri-Tourism.

Life has come a full circle for me and Noel. From a shabby nipa hut that had a kitchen on bare ground, our family of four now lives in a semi-concrete structure with two rooms and a toilet and bath. Before we used to throw waste into the fields around the house. Now we take greater care, because now we have found home.

Tourism indeed means jobs. Keeping a job means being able also to reach out to others. Tourism pays, and it pays to protect and conserve the environment.