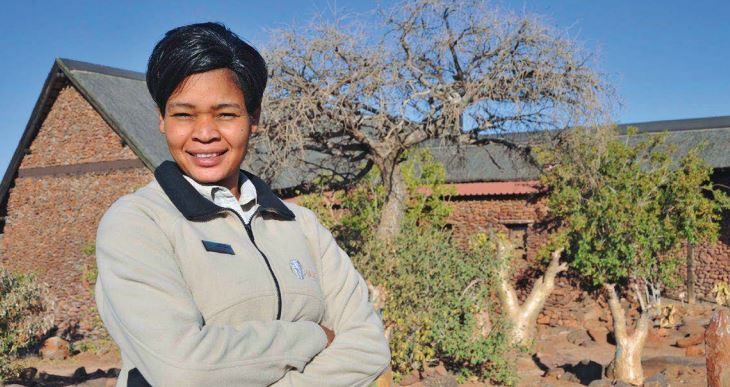 My name is Memory Ganuses, and this is my story….

I will try and see how I can write this. After I completed my grade 12 in November 2002, I did not have a clear idea of what I want to do next. As I could not go for further studies due to lack of funds, I opted for going to Swakopmund to look for a job, just to keep me going, for starters…

After a tough life of two years in Swakopmund, in and out of jobs, from being a domestic worker as a young lady just out of school, and then as a cashier at PEP, a local clothing store, and then as assistant Chef at de Kelder Restaurant, I felt I had enough of city life so I decided to go back home to the farm.

After a tough life of two years in Swakopmund, in and outof jobs, from being a domestic worker as a young lady just out of school, and then as a cashier at PEP, a local clothing store, and then as assistant Chef at de Kelder Restaurant, I felt I had enough of city life so I decided to go back home to the farm.

I returned to the farm for some time, eventually learning about the Khoadi-Hoas Conservancy and Grootberg lodge. Back then I was not so well informed about the conservancy and all its endeavours. I took my CV to the conservancy head office, hoping for a job at Grootberg Lodge. I was employed as a baby sitter for the Managers at the Lodge – it was the only job available by then, so I took it. Then later I got a job as a waitress the lodge, in 2009. That was the beginning of a bright future for me…

This is where it all started. I learned about the conservancy and how the lodge and the conservancy works together, which was quite amazing. I also learnt about how to live with the wild animals, such as elephants for example, learning things like what to do when you have an encounter with an elephant, and also a very important one is not to shoot an
elephant when it comes and damages your water point, but to in fact report that to the conservancy, and they will compensate you in a way that in the end leaves both parties happy.

I slowly grew fond of the nature and what it has to offer. Then in 2013 I was very lucky to have received a bursary from the African safari lodge foundation to go and study for a certificate in small accommodation establishments in Graaff Reinet in South Africa.

My studying experience in South Africa was quite fun. I learnt many more interesting things about tourism at the college all thanks to the SACT for having showed me the right direction. We were trained how to deal with guests in a more professional way, and many more. Upon my return I was granted a job at Grootberg lodge as an Assistant Manager.

My life has changed tremendously. Some years ago when I was finished with school, I did not picture myself where I am standing today. I am no longer the young girl that had no ambition when she had finished school, but I am now a grown lady who is aiming towards success in tourism, all thanks to everyone who played a role in my transformation. It has also affected my family and my community in a very productive way as now I
can tend to the needs of my family, and I am also like an ambassador for my community.

I play my part in the development of the Khoadi-Hoas Conservancy in a way, which makes me very proud. The conservancy is grown from strength to strength as with increased conservation awareness the wildlife numbers have grown, and the conservancy has a compensation scheme in place for human and wildlife conflict, this shows that the community is not left in the dark but is well taken care of.