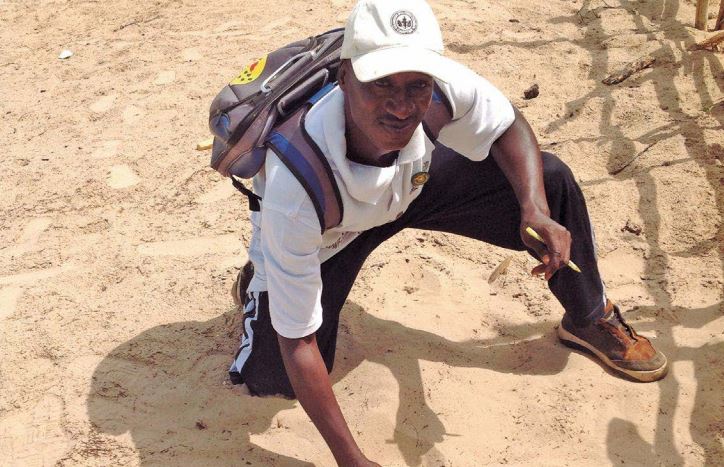 Landing Jatta at the Eco Sandale Eco Retreat, The Gambia

My name is Landing Jatta, from Kartong, Gambia, and this is my story…After working as a primary school teacher for 15 years in my home village of Kartong with a very modest monthly salary, I became a turtle hunter in the year 2000. The work was not difficult. Our coastline has been home to turtles for as long as I can remember. As a child I played with turtles, and grew up knowing how they live, where they hide, when the breed, the cycle of their lives. I started earning more than seven times more than in my previous job. What I knew was that I had found a way to take care of my family of 17 people. What I did not know was that I was endangering the existence of rear marine species in Gambia. When I realised this, when realised the damage I was doing to my own home, I was not happy. So, in 2014, I transformed from a turtle hunter to a turtle savior. It was all thanks to a turtle project hosted at the Sandale Eco Retreat beach in Kartong beach which was supported by the World Wild Fund (WWF) and the British Embassy in Gambia. Following some sensitization and education on the importance of turtles in marine biodiversity as well as in human lives by the WWF and the COAST project, I started to fully understand the damage I have been causing and promised to immediately stop the hunting activity, forever. In order to overcome my fears of not having enough money to feed my family, Sandale Eco Retreat offered me a job as a conservationist and a guide in the turtle population recovery project, wherein turtle eggs laid on the beach are protected and hatched, and the babies released in the sea. So far, over 4,300 turtle eggs have been collected and hatched, producing over 3,000 baby turtles. I take personal pride in knowing I have a direct impact on the wellbeing of the turtles in my country, that they are protected. The project is very popular with the visitors to Sandale Eco Retreat. I take on conducted tours during their stays. Thanks to tourism in general and this form of responsible tourism in particular, I and my people are able to find good ways of making a living, and playing a part in growing our country. I no longer have to hunt for a living. Instead I am able to contribute to the protection of biodiversity in Kartong, making it a safe place for turtles to live, and a better place to visit. The turtles and I are one. Today, through protecting our turtles, and growing our turtle tourism, together my turtles and my people know the future is safe