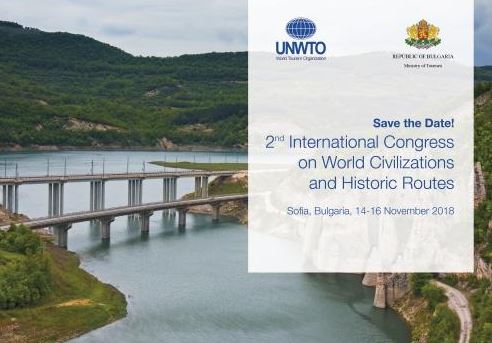 Event information details with accompanying picture of a bridge over water.
Jointly organized by the Ministry of Tourism of the Republic of Bulgaria and UNWTO, the2nd International Congress on World Civilizations and Historic Routes will be held on 14-16 November in Sofia, Bulgaria.

Cultural heritage lies at the very heart of the collective memory and identity of the citizens of the world. Destinations that boast archaeological sites, ancient architecture, folklore traditions and arts and that find themselves along these ancient routes can assume the role of catalysts for exchange of experience between peoples and cultures through tourism development, and thereby promote sustainable growth, prosperity and peace in their own regions.

Recognizing the above, the Congress will explore the possible ways in which world civilizations could be brought to life through tourism, in particular by making use of the networks developed along historic routes. The congress will also focus on adressing how tourism along these routes can play a leading role in creating new socio-economic opportunities for development at local, regional and national level while safeguarding and promoting tangible and intangible ancient heritage. Participants will have the opportunity to build upon the great cultural wealth spanning along the ancient routes, learn from different experiences and generate synergies among themselves and between several networks developed alongside the ancient cultural routes.