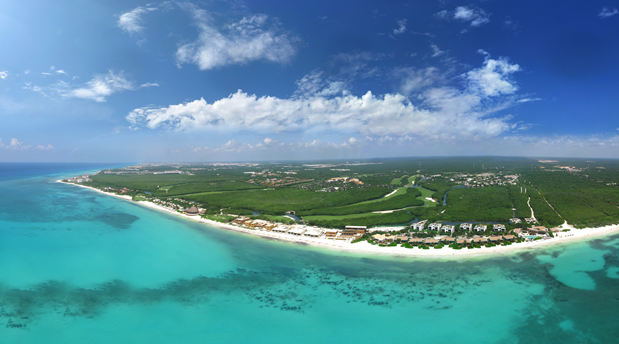 The Mayakoba Tourism Development initiative is situated in Riviera Maya, within the Solidaridad municipality in the northern reaches of the Mexican state of Quintana Roo. It encompasses a 249 hectare complex, located on a karstic coast with a humid tropical climate. The local environmental systems – known as Punta Bete and Punta Maroma – form strips parallel to the sea, consisting of beaches, coastal dunes, mangrove forests and ‘medium’ forests. Tourism has a high environmental impact on such dune and mangrove ecosystems, especially mass tourism with a high density of rooms. Recognizing the need for a very different model of tourism development in Mayakoba, the Spanish company Obrascón Huarte Lain (OHL) designed and implemented an innovative, low-density model. Engineers, architects, experts, consultants and scientists from research centres – both local and international – undertook specialized studies and participated in technical planning.

Mayakoba’s main location lies behind the mangrove forest and involves minimum use of the rear dune’s watershed. It seeks to have the lowest possible impact on local ecosystems. The complex forms an environmental matrix, marked by the use of existing terrestrial ecosystems and the creation of a 25 hectare aquatic ecosystem of canals, which functions as a natural estuary. Designed through rigorous study based on scientific foundations, the area’s tourism infrastructure consists of four world-class hotels and a PGA Tour-certified professional golf course. Mayakoba’s natural and anthropic elements are integrated within a framework of ‘lasting natural luxury’. Its operation has enabled the maintenance of pre-existing flora and fauna, as well as the creation of aquatic and coastal habitats that did not previously exist. This has sparked an increase in fauna, particularly birds, fish and amphibians, forming an important new wildlife sanctuary.