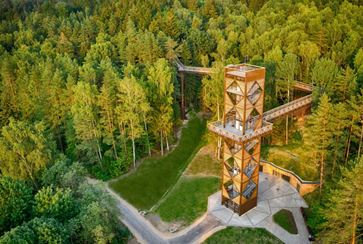 The Treetop Walking Path was opened in Anykščiai Regional Park in this summer. It became a sensation. This Path is the first among Baltic and Eastern Europe lands. The annual number of visitors in small Lithuania’s town Anykščiai, which belongs to Anykščiai Regional Park, is about 9,000. After the Path’s opening (in less than 3 months) around 150,000 visitors visited the Treetop Walking Path! Abundant number of visitors from various countries proves that it has been a successful project and a great move in strategy of Anykščiai educational tourism development.

The success is due to:
- An innovation in Baltic States and Eastern Europe.
- An extremely carefully and thoughtfully chosen place. The Path is located in relatively small but extraordinaire forest. It is widely known because of the poem “The Forest of Anykščiai” written by famous Lithuanian writer Antanas Baranauskas. The poem reveals (some quotes are in The Path’s information stands) particularly close relationship between man and nature. Moreover, this place is an intersection of hiking, cycling, water and motor tourism routes. In addition, Anykščiai forest with a lot of natural and cultural heritages is preserved in the Anykščiai forest’s landscape reserve.
- The possibility to combine different types of tourism and recreation: active, educational, health and cultural tourism. The visitors can order the educational program and learn interesting facts about the forest’s biodiversity.
- An original architectural solution: the folk band’s motifs from Lithuanian ethno-cultural region called the Highland.
- Special attention for people with disabilities. The Path is the only place in Lithuania where people with disabilities can be taken this high.